Vlad's personality is a leader type with aggressive tempers, however he is always caring about his family and does anything in his power to help when they're in trouble. In season 1 and 2 he was a very scared boy who slept with a teddy and above that Vlad never spoke out for himself, meanwhile that changes in season 3 where he becomes more aggresive but since The Return he has become a leader alongside having punishemts if you don't follow his rules. This is shown when he threatens Bertrand de Fortunessa for trying to kill Ingrid to frame the Van Helsings.

Erin Noble is Vladimir Dracula's breather/slayer girlfriend. Vlad cares deely for her and even mentions that he loves her for who she is in series 4. He even plans to run away with her so as not to marry Adze, throwing away his life for her. Erin loves him just as much and leaves with a broken heart so he can be the ruler he needs to be and achieve the peace he always wanted.

Vlad is trying to keep order with the ceasefire but is struggling. Jonno is on his side along with Erin and Bertrand. He now has a established relationship with Erin and a friendship with Jonno but he doesn't trust Bertrand. Things are complicated with his father and sister working together against him and when his father agrees to an arranged marriage for Vlad to Ramanga's daughter Adze. 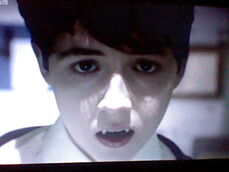 1 of 13
Add photo
Retrieved from "https://youngdracula.fandom.com/wiki/Vladimir_Dracula?oldid=6159"
Community content is available under CC-BY-SA unless otherwise noted.